The Fire Lord, Not the Junk Heap 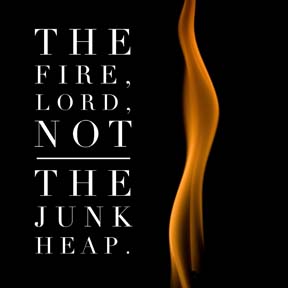 The famous radio personality and early pioneer of television, Arthur Godfrey, grew up in an era very different from today.  It was a time when a boy could wander down to the blacksmith shop on a lazy afternoon and watch the smithy work at his anvil and forge.  It was a favorite past time of the young Godfrey.  Sometimes he would watch the blacksmith sorting the scrap metal.  The man would pick up a piece of metal from a holding bin, turn it this way and that in his large hands, then either toss it into the fire to be softened and hammered into some useful tool, or thrown into a junk heap to be discarded.  From this experience Arthur forged a simple prayer which he used all his life.  Whenever seized by his own sense of sin or some personal moral failure he would pray—“The fire, Lord, not the junk-heap.”  It is a prayer that captures two essential dimensions of Ash Wednesday and Lent— a prayer for pardon and a prayer for purity.

“Two men” said Jesus “went up to the Temple to pray, the one a Pharisee and the other a tax collector.”  So begins a parable appointed to be read in the daily office for Ash Wednesday—Luke 18:9-14.  At first blush it seems quite simple.  Most of us have heard it before; but if you read it again and again with the purpose of explaining it to others you may find, as I often have, it is a most disconcerting parable.   This is not two men just happening to drop by the synagogue or church around the same time to pray about a problem in their lives.  This is going up to the Temple for the evening sacrifice—the place of atonement.

The Pharisee is definitely thinking about himself, his spiritual journey, how he’s doing (a very good practice after all)—and he rightly evaluates as he thinks of others, “There but for the grace of God go I.”  That is he is thankful he is not guilty of the sins of so many others—and for a moment God is addressed.   Yet, then a dangerous movement takes place.  His focus shifts.  Rather than continuing to look up to God his eyes look downward not merely upon the behavior of others but toward actual people—“even this tax-collector.”

Most of us know this long gaze cast at the other’s sin from the vantage point of our successes—however we may measure success or spiritual maturity—Bible reading, prayer, helping others, generosity, volunteerism, recycling, tolerance towards others beliefs, etc….  But suddenly with this gaze we find ourselves standing with the Pharisee and our spiritual or inner life like his turns sour.

This Pharisee despite all his religious striving (after all he fasts twice a week and gives 10% of his income—what priest would not want him in his congregation?) hasn’t an ounce of humility. Certainly he has a moral conscience.  It tells him “do this, don’t do that; this is right, this is wrong.”  But it seems to focus only on his behavior not towards his heart.  His conscience is like a plow that only scrapes along the surface of his soul.  Its blade has not dug deep enough to break up the hard ground of his self-righteousness.  He is a man who has forgotten his need for forgiveness; he seeks no communion with the Unseen because his eyes have grown weary with what they have seen; he has no desire to be something better because he is weary with what he is.  His is a religion that keeps him tied to surface needs.  If there has ever been a time he felt the lamb of the evening sacrifice was being slaughtered and cut for him—its blood spilled for his sin—it has long since been forgotten.  Just a little sprinkling of incense upon the coals of a side altar is sufficient for his insignificant trespasses….

His is the sort of religion found in many places today that allows a man to keep his self-righteousness — or a woman to keep her superiority over others – intact.  And that my friends is too often my problem too—so, frankly,  giving up chocolate, or meat or even an evening cocktail just doesn’t allow the blade of God’s plow to dig a deep enough furrow for true repentance or to receive through faith the needed forgiveness that yields a corresponding love for God and others. (Luke 7:40-50)

The tax collector’s prayer in contrast is disarming: “God, be merciful to me a sinner!”  He doesn’t look or ask for some divine process within his soul to make him right in the sight of God; he doesn’t even ask for God to make a right spirit within him; rather he looks only toward an act of God given on his behalf.  Yet this is the prayer that receives the sentence of justification pronounced by the One—who on the cross became the Lamb of the Sacrifice—who is himself both Priest and Victim. Jesus declared it was the Tax-collector, not the Pharisee who went home with his life right in the sight of God.  Martin Luther once counseled a troubled believer after his conscience had been convicted and forgiveness proclaimed, “You should not believe your conscience and your feelings more than the word which the Lord preaches to you….  This is the real strength to trust God when all your senses and reason speak otherwise; and to have greater confidence in Him than how you feel.”

And so here’s a good prayer for Ash Wednesday as we begin another Lenten season:

“God be merciful to me a sinner!”

So, then, what about Purity?

Is this not also a theme of Ash Wednesday?  Well, yes, and here too a text of Holy Scripture emerges from the day’s assigned liturgy:  Psalm 51.  This psalm which David prayed after Nathan preached the word that harrowed the king’s conscience and brought him to his knees was not a prayer that asked for pardon alone; the sense of pardon also brought a yearning for purity:

“Create in me a clean heart, O God
and renew a right spirit within me.
Cast me not away from your presence,
and take not your Holy Spirit from me.”

His pardoned and penitent heart seeks God’s grace for holiness, purity and transformation; for that which he does not have in himself, cannot give himself, and certainly does not deserve for himself.

Ash Wednesday and Lent puts us in mind of our need for each.

Both movements are found in Arthur Godfrey’s profound but simple prayer, “The fire, Lord, not the junk heap.”

This message was delivered February 10, 2016